by Elliott Campbell, UC Merced The future resilience of coast redwoods is now of critical concern. Redwoods rely on fog to supplement their water intake during California’s long dry seasons. An observed decline in coastal fog over recent decades may be associated with human-caused climate change and expanding urban heat islands. However, fundamental ecological measurements are obscured by the […] 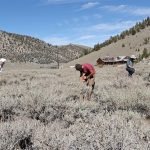 It looked more like the rituals of a secret society than science. Stepping high over gray-green clumps of sagebrush, the gaggle of five pulled a tangle of climbing rope taut to form a square with three columns. After lowering the corners carefully over their selected area, the sun-hatted university students began pawing the foliage in […]