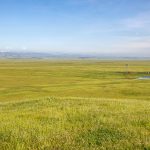 UC Merced aims to build a field station to facilitate research and instruction on the NRS’s Merced Vernal Pools and Grassland Reserve.

By Lorena Anderson, UC Merced If you want to understand how plant populations will respond as the climate changes, just examine the plants in different locations. That’s one of the conclusions drawn by UC Merced School of Natural Sciences Professor Jason Sexton in a new American Journal of Botany issue exploring the evolution of plants. Written by Sexton and graduate student Erin […]

by Lorena Anderson, UC Merced Communications Research, teaching and public outreach were all on display this Thursday at UC Merced’s celebration of the University of California Natural Reserve System’s 50th anniversary. The inaugural celebration of the 39-reserve system’s golden anniversary featured a driving tour of the Merced Vernal Pools and Grassland Reserve, which covers nearly […]

More than 6,560 acres of open grassland surrounding UC Merced were dedicated as part of the UC Natural Reserve System this Wednesday. The Merced Vernal Pools and Grassland Reserve, approved by the UC Regents in January, is the 39th wildland site to join the system. The celebrations began with a birding tour that ranged deep […]