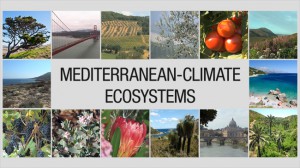 Great weather, abundant harvests, and some of the world’s most cosmopolitan cities make up what are known as Mediterranean-climate ecosystems. But the landscapes that house Rome, Perth, San Francisco, and Cape Town  are also  some of the world’s most critical biodiversity hotspots. Their tremendous biological diversity, second only to tropical rainforests, faces common threats such as invasive species and intensive development.

With Lands of Two Seasons: The World’s Mediterranean-Climate Ecosystems, the UC Natural Reserve System and University of California Television inaugurate a six-part video series about these regions. The introductory program offers an overview of the world’s Mediterranean-climate zones, pointing out their similarities, unique characteristics and importance, while also illuminating the factors that threaten them. Subsequent programs on subjects ranging from geology to ocean and atmospheric forces will explore the many factors that make these environments so unique and alluring.