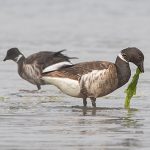 Does the personality of a ground squirrel affect its foraging style? Which microbes live in harvester ant guts? What drives the production of Daphnia “superfleas” ?    University of California graduate students aim to answer these natural mysteries and more with funding from the UC Natural Reserve System’s 2017-18 Mildred E. Mathias Graduate Student Research Grant […]

The UC Natural Reserve System is accepting applications for its 2017–2018 Mildred E. Mathias Graduate Student Research Grants. The program supports research by UC graduate students at one or more of the 39 NRS reserves. Graduate students from any UC campus are welcome to apply. This year, the California Tobacco-Related Disease Research Program is supporting […]

California is a wonderland of natural riches. Its boundaries include wave-tossed shorelines, sere deserts, snowy mountaintops, and timeless oak savannas. California has the world’s most massive trees, its oldest living organisms, the highest and lowest elevations in the lower 48 states, and the largest population in the nation. The UC Natural Reserve System helps California […]

Sixteen University of California graduate students have been awarded 2014-15 Mildred E. Mathias Graduate Student Research Grants from the UC Natural Reserve System. The students, from six different UC campuses, received up to $3,000 to fund field projects at 22 different NRS reserves. Virtually all of this year’s successful proposals will study ecology, evolution, or […]

By Susan Suleiman, UC Newsroom Carpeting the high valleys of Yosemite and other parts of the Sierra Nevada, mountain meadows are more than an iconic part of the California landscape. The roughly 17,000 high altitude meadows help regulate the release of Sierra snow melt into rivers and streams. But climate change and California’s severe drought […]

The UC Natural Reserve System is accepting applications for its 2014-2015 Mildred E. Mathias Graduate Student Research Grant. The grant supports research by UC graduate students at one or more of the 39 NRS reserves. Graduate students from any general UC campus are welcome to apply. Each award can total up to $3,000. A maximum […]

By Jyoti Madhusoodanan, Santa Cruz Sentinel Coyotes, familiar denizens of field and hill, seem to be developing a taste for seafood, including elephant seal carcasses. Preliminary data from UC Santa Cruz researchers suggest that ancient coyotes that roamed the Central Coast long ago rarely got their food from the sea. A graduate student in UCSC […]

To a scientist, the natural world is full of mysteries. How does the winter ant thrive in cold weather when most insects go underground or perish? Are urban birds stressed out by the glow of street lamps, the roar of traffic, and the constant presence of people? What do some of the world’s largest pinnipeds, […]