Rosemary Gillespie (PhD, University of Tennessee, Knoxville) is a professor of insect biology and the Schlinger Chair of Systematics in the UC Berkeley Department of Environmental Science, Policy, and Management, and the director of the Essig Museum of Entomology. She is a fellow of the California Academy of Sciences and of the Royal Entomological Society. In 2005, she was the recipient of the Presidential Award for Excellence in Science, Mathematics, and Engineering Mentoring.

Professor Gillespie’s research focuses on understanding evolutionary patterns and processes among populations and species as outlined below. Her primary focus is on islands, particularly remote hotspot islands of the Pacific. Hotspot archipelagoes – in which islands emanate from a single volcanic hotspot from which they are progressively carried away by a geological plate – allow her to examine how communities have changed over time and thus gain insight into the nature of processes shaping communities over evolutionary time. These archipelagoes make it possible to visualize snapshots of evolutionary history. For example, the geological history of the Hawaiian archipelago is relatively well understood, with individual islands arranged linearly by age. Thus, early stages of diversification and community formation can be studied on the island of Hawaii, an island still forming, and compared to progressively later stages on the older islands of Maui, Lanai, Molokai, Oahu, and Kauai. A roughly similar chronological arrangement is found in the archipelagoes of both the Marquesas and the Societies in French Polynesia. [https://nature.berkeley.edu/evolab/] 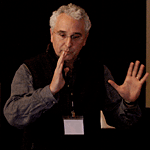 Thomas Smith (PhD, University of California, Berkeley) is a professor in the UCLA Department of Ecology and Evolutionary Biology, founder and director of UCLA’s Center for Tropical Research and acting director of the UCLA Institute of the Environment. Smith was a Senior Fulbright Research Scholar and is a fellow of the California Academy of Sciences, the American Ornithologists’ Union, and the Zoological Society of London.

Professor Smith has over 20 years of experience working in the rainforests of Africa, Australia, Latin America, and Hawaii. Combining molecular genetics and field biology, Dr. Smith identified a new theory of how speciation occurs in tropical forests. In a series of studies published in the journals Science, Nature,and the Proceedings of the National Academy, he has shown that for a wide range of taxa in rainforests worldwide, the processes of diversification and speciation take place not only within “biodiversity hotspots” but also along environmental gradients or ecotones representing the transition from one habitat to another. The implications of this discovery are far-reaching. With climate change threatening large-scale shifts in species distributions and the habitats on which they depend, the hotspots of today may not be the hotspots of tomorrow. The results of Dr. Smith’s research point to new and more effective ways of prioritizing regions for conservation. Dr. Smith is a frequent consultant to the World Bank and numerous conservation organizations, helping them implement conservation programs and establish new parks in tropical countries. [https://www.ioes.ucla.edu/person/thomas-smith/]