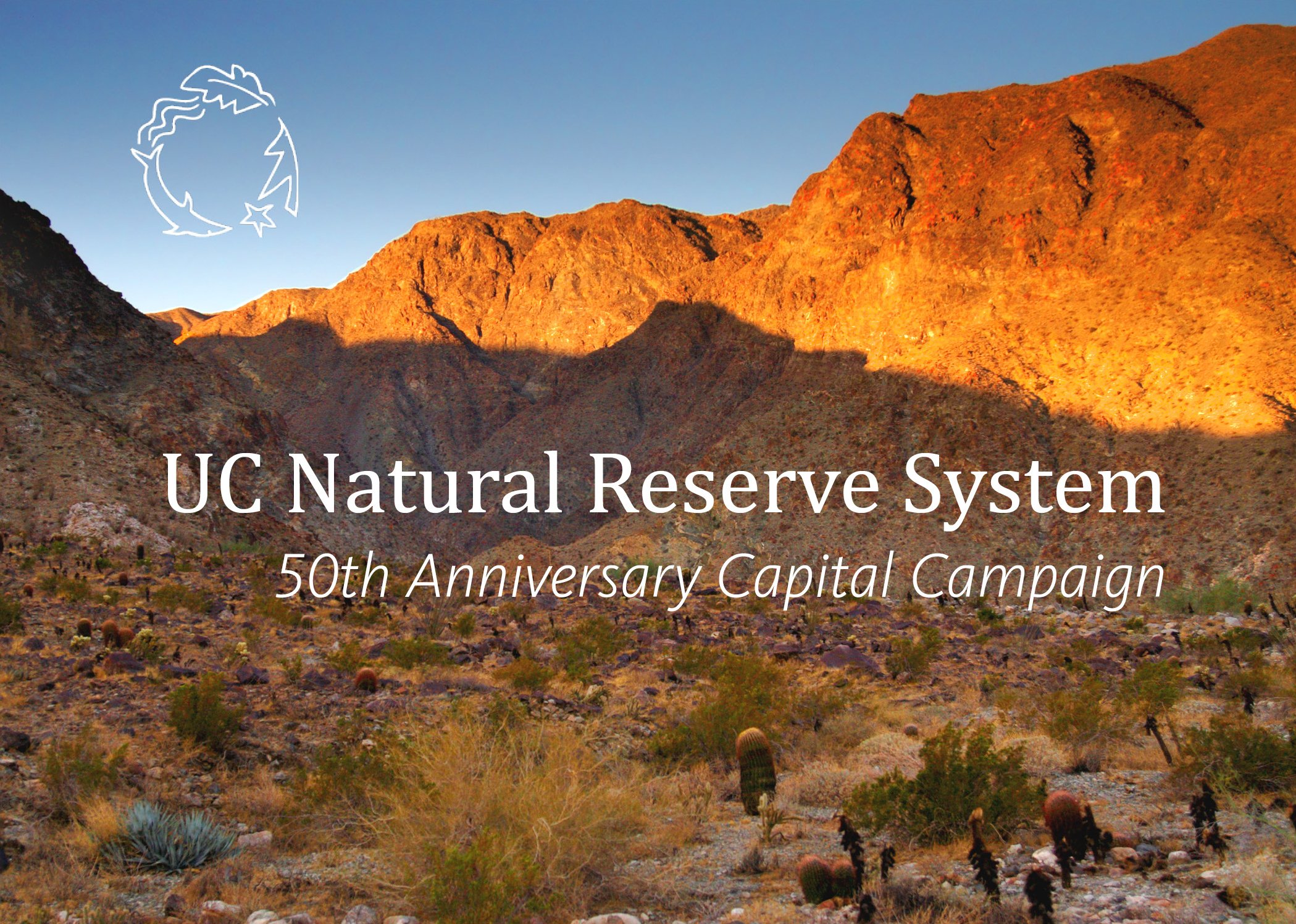 The University of California Natural Reserve System is launching a fundraising campaign to raise $50 million to continue to protect its natural lands and serve future generations of students and scientists. The 50th Anniversary Capital Campaign will enable the NRS to become financially sustainable, support diversity programs, and supply the infrastructure to support world-class research and education programs.

Nearly $40 million, or 80 percent of the goal, has already been raised in gifts and pledges since the quiet phase of the 50th Anniversary Capital Campaign began July 2015.

“The 50th Anniversary Capital Campaign is our chance to bring major resources and a new vision for the network of protected areas and field stations that is the UC Natural Reserve System,” says executive director Peggy Fiedler. “This support will revitalize the NRS, enabling us to provide an unparalleled platform for environmental education and discovery over the next fifty years.”

Working as a system

Every reserve is represented in the campaign. Gifts to individual reserves will be considered fundraising contributions to a reserve’s home campus. The campaign also supports three NRS systemwide initiatives:

The Samuelsen Conservation Scholars Program addresses the need to train the next generation of environmental leaders, from undergraduates to postdoctoral researcher. One initiative pairs undergraduates from underrepresented backgrounds with faculty mentors to conduct research at reserves. It seeks to improve the diversity of environmental fields, broaden perspectives on complex environmental problems, and enlist conservation leaders from the nation’s increasingly multicultural population. Another initiative partners with the CalTeach program to provide additional educational and research opportunities to UC undergraduates interested in a teaching career. The program honors the first director of the NRS, Roger Samuelsen.

The California Heartbeat Initiative will keep a finger on the pulse of the state’s changing natural environments with remote sensing technologies such as drones, sap flow meters, and networked microclimate stations. The project will monitor how shifts in environmental conditions affect the plants and animals that make up native ecosystems. The goal is to produce environmental forecasts that let wildlife managers, farmers, policymakers, and the general public better prepare for the future.

The NRS held its last fundraising campaign in 1972, when the system consisted of 16 reserves. Since then, the NRS has grown to 39 reserves, making it the world’s largest university-administered network of reserves.

Today, the NRS makes more than 756,000 acres of California wildlands available for research and teaching. This library of ecosystems includes samples of most of California’s major habitat types, from alpine mountaintops and conifer forests to oak woodlands and coastal beaches. Reserve lands remain protected from development in perpetuity, enabling study by students and researchers over the long term. Reserves also provide facilities such as classrooms, laboratories, and overnight accommodations which enhance the value of reserves for students and researchers.

A crown jewel of California

“The success of our campaign reflects what an extraordinary track record has been established by the Natural Reserve System,” Beahrs says. “It is a treasured asset, but so much of its potential remains to be tapped and leveraged. This campaign will help the NRS optimize its capacity so that California can continue to address critical environmental challenges facing our world.”

For information about the campaign and how to get involved, please visit https://ucnrs.org/give-now/